For each service, you can define your rule for deduplication.

You can set this up by going to your Squadcast account 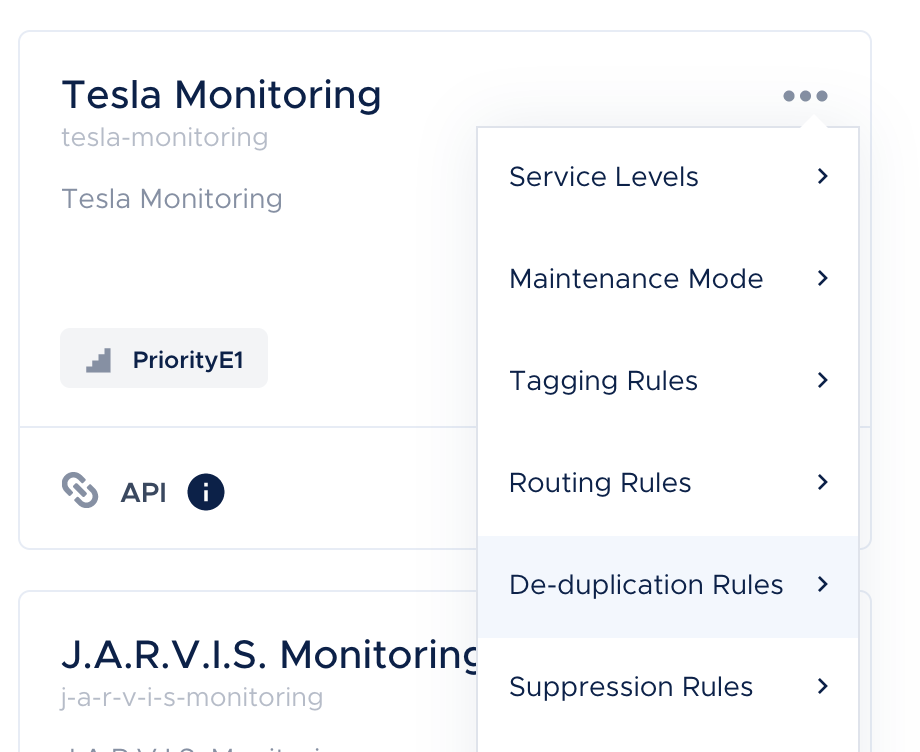 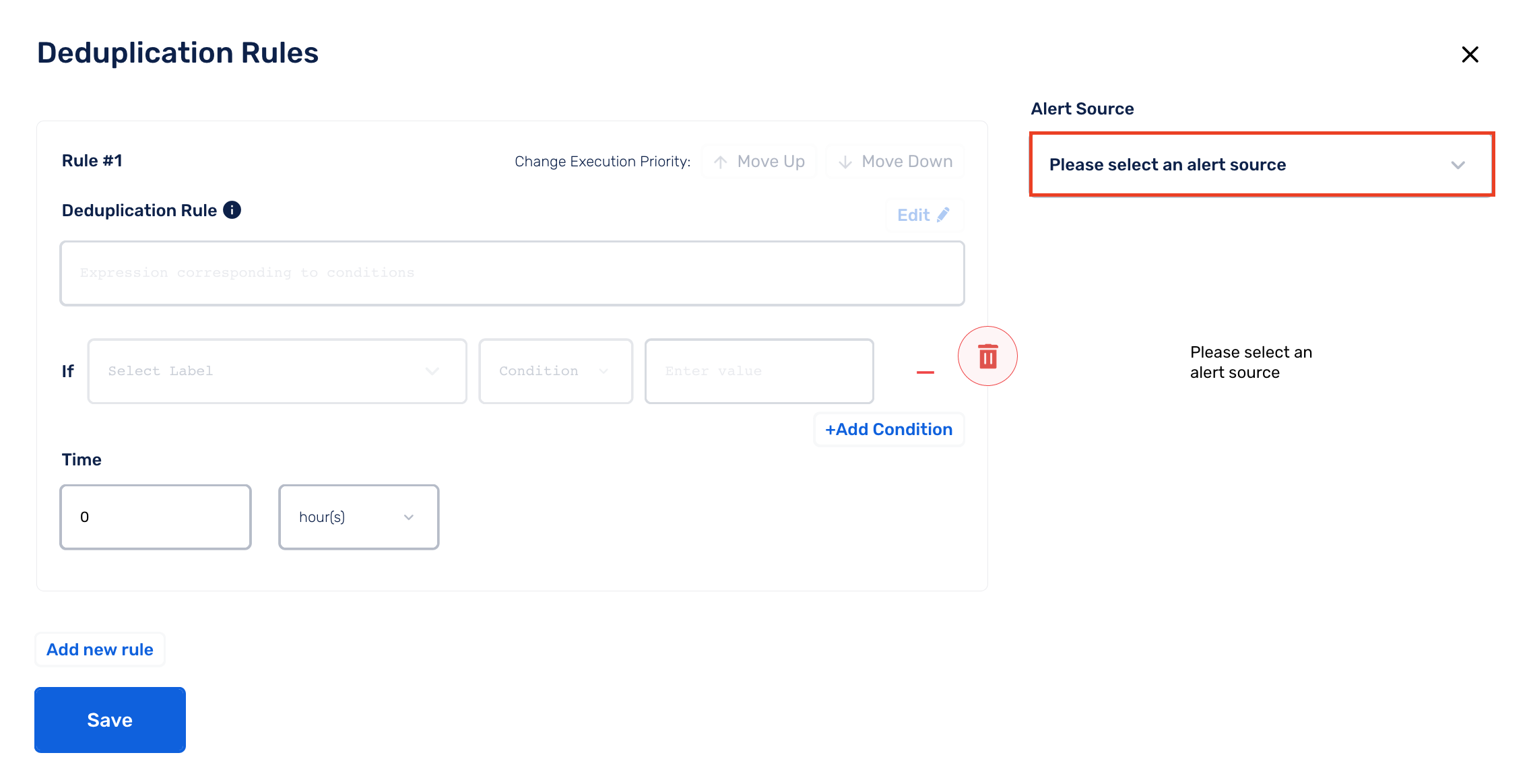 By default, when a new rule is being created, a user is prompted to use the drop-down blocks for convenience in-order to create a Deduplication Rule. As you build the expression from these drop-downs, simultaneously you can see that the corresponding deduplication expression, a raw string for the same is being generated automatically, just to ensure that you are building the right rule.

The drop-down blocks are beginner friendly for sure, but they aren't as flexible as writing your own raw string.

If you want more flexibility while building your expressions, you may opt anytime to switch to the raw string mode by clicking the edit button as shown.

The method of specifying one rule is independent from others in the same Service as well.
So, for the same Service, you may have few rules in drop-down block mode, few in raw-string mode.

i. Match corresponding field of incoming payload with a past payload (only == operation is allowed for this using is same as comparator from drop-down)

If you want to achieve something else apart from these 2 cases, then prefer using the raw string alternative.

Then, select a time window for which the rule holds true. The maximum time window available is 2 days, i.e. 48 hours.

During the time window set, incidents that occur are compared against all incidents that come in during that time period and will then get deduplicated against the first incident that it matches with.

The rules will be checked against all the incidents based on the time window set in place. 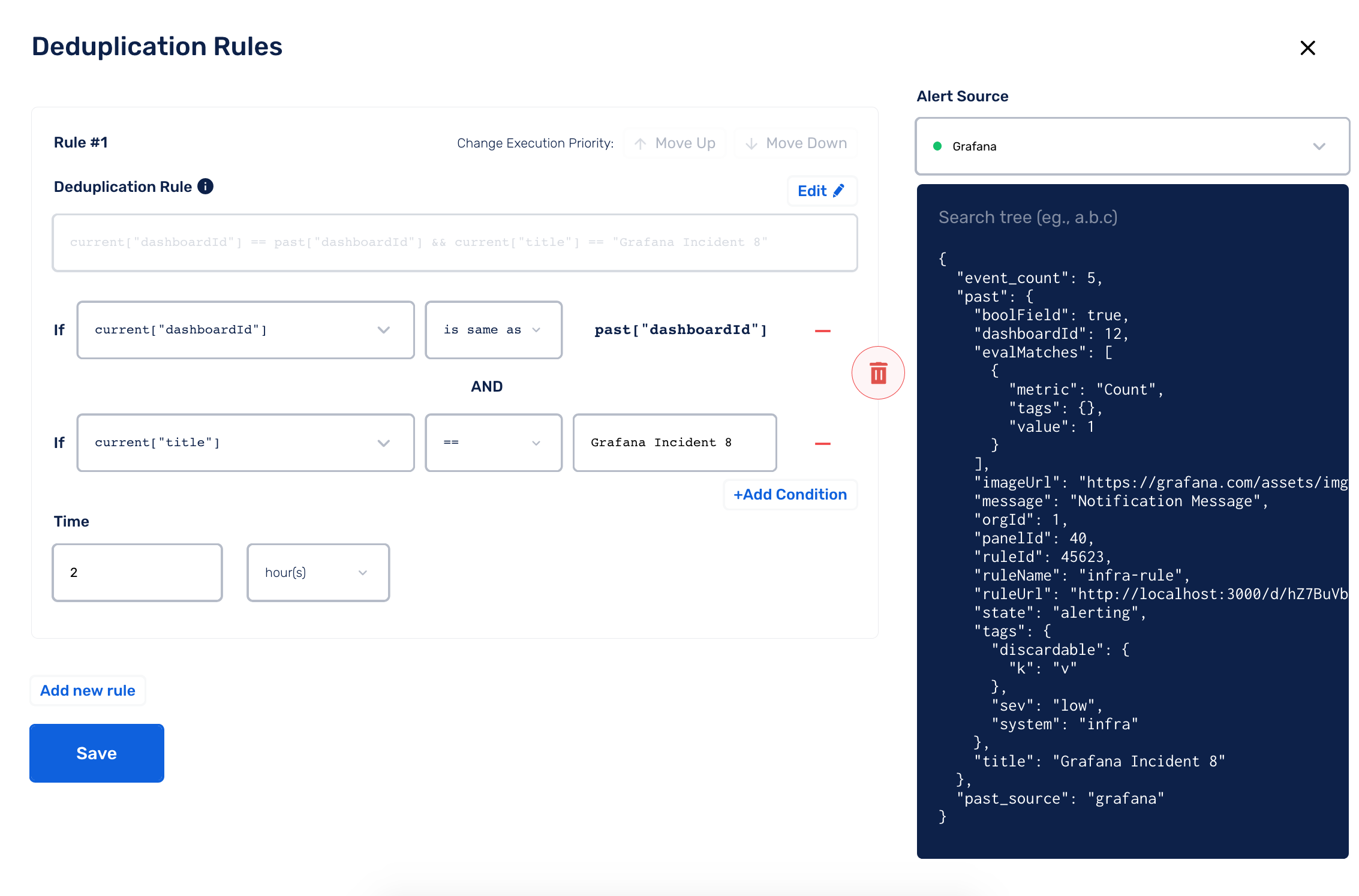 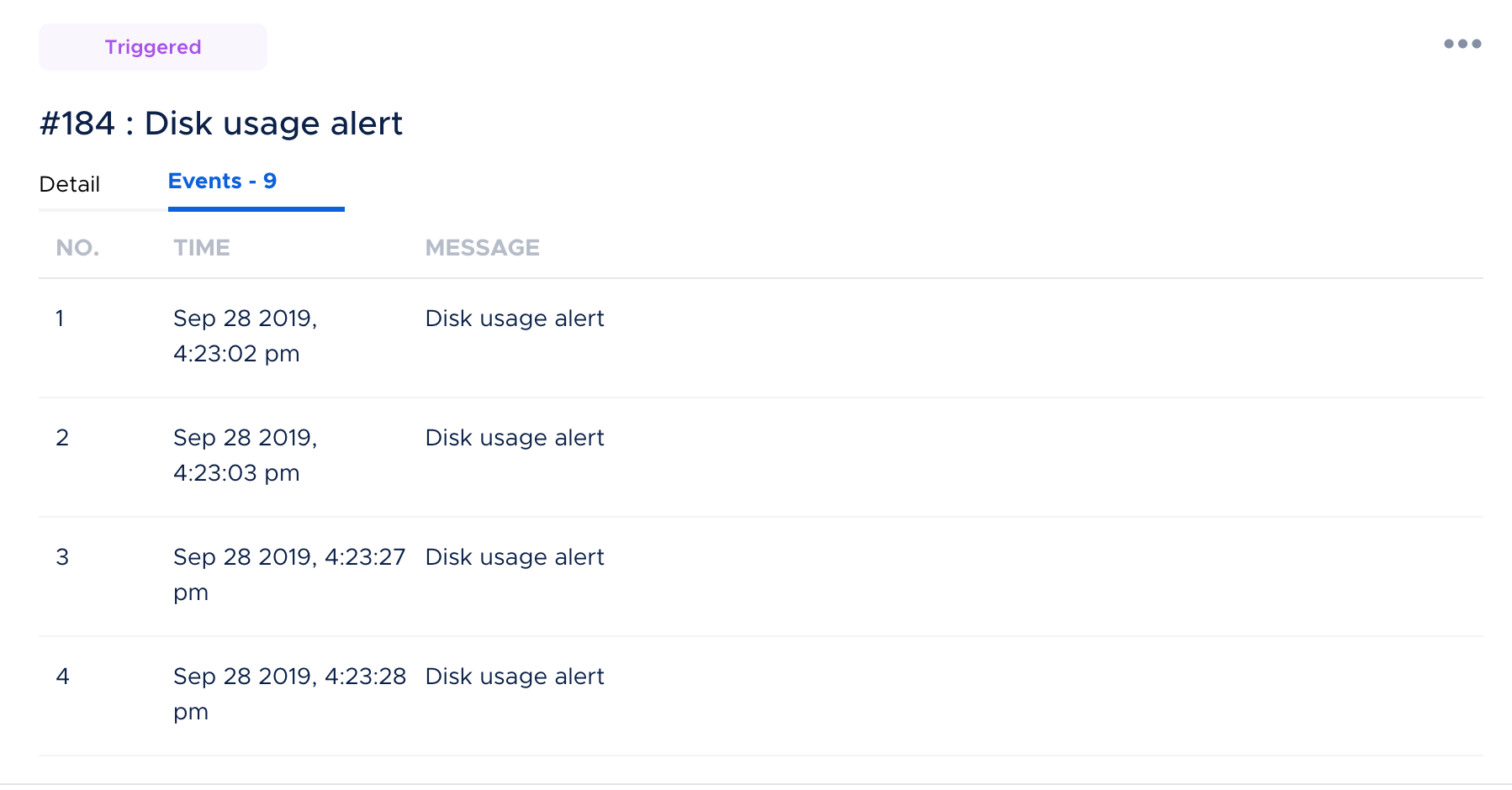 The rules will be checked against all the incidents based on the time window set in place.

You can add as many rules by selecting the "Add rule" button below. The deduplication will be true for the first rule that matches in the list of rules added by you.

So, you can rearrange the rules to prioritize them suitably by using the Move Up and Move Down buttons on the top-right corner of the Change Execution Priority segment. 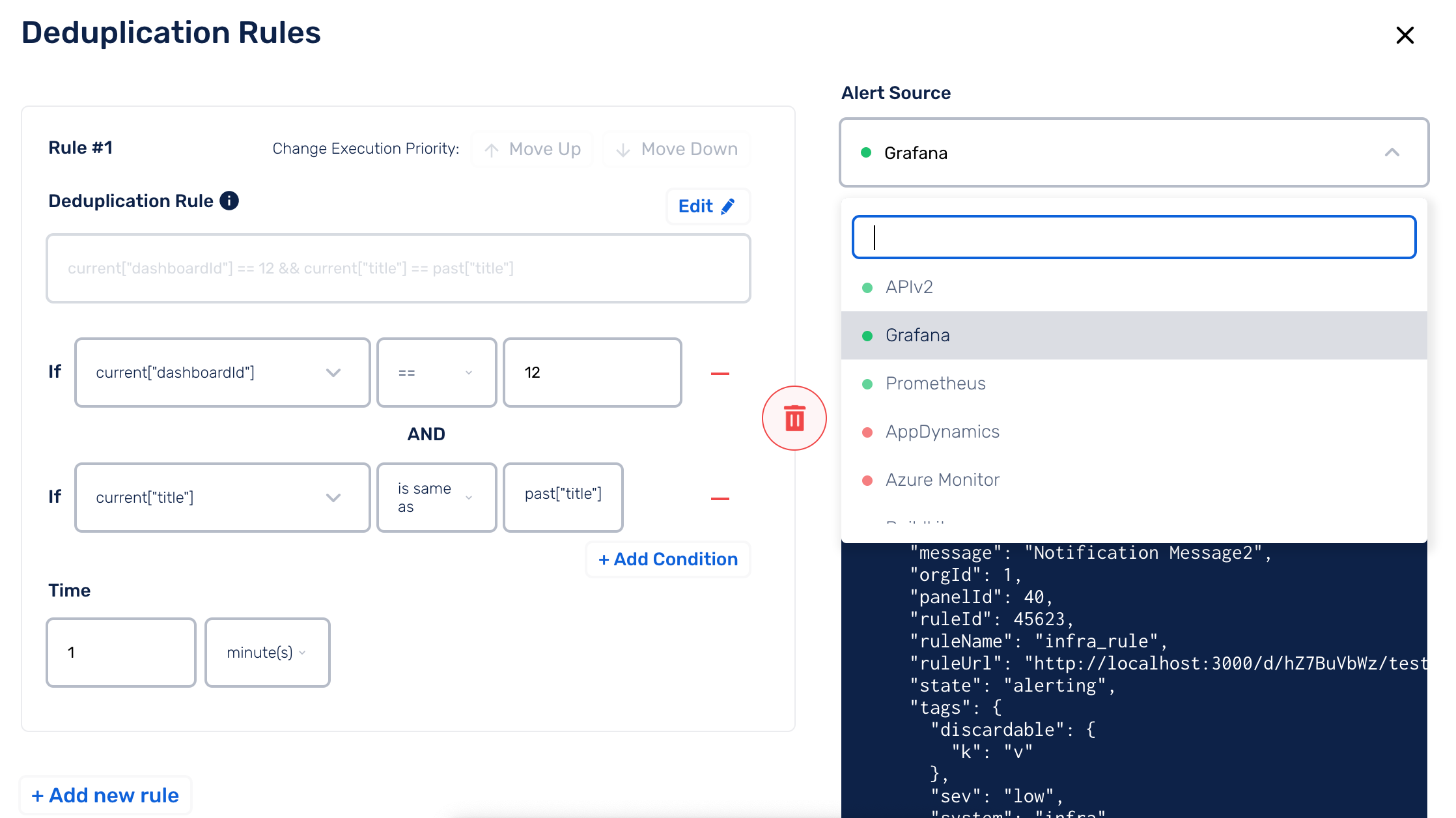 By default, the Deduplication Rule would be executed across all the Active Alert Sources for the Service unless the rule specifies otherwise .

If you want to deduplicate across specific active alert sources, you can specify this explicitly in your rule to ensure that it is executed accordingly.

For example, if there has been an event triggered via alert source sentry and there is another alert triggered via jira-cloud indicating the same incident, then you can de-duplicate them by using a rule which will look something like:

This will have to be configured as a raw string in the Deduplication Expression textbox. 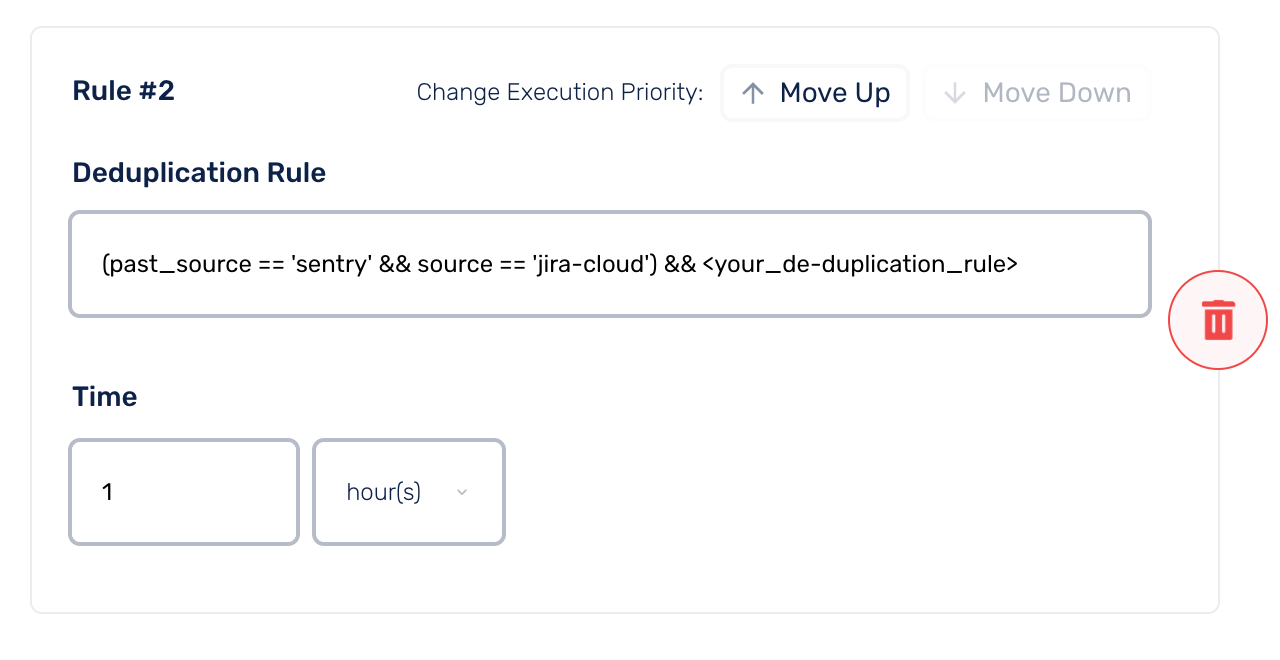 The rule engine supports expressions with parameters, arithmetic, logical, and string operations. You can also check out this link to get an idea of all the expression types accepted in Squadcast.

This can be used in scenarios where you don't want to deduplicate more than n number of events to a particular incident.

Use Case
For any incoming alert, if